What is the meaning of Namaste?

Composed of two root words “namah” which means “bow” and “reverential salutation or adoration” and “te” which means “to you“. Namaste is a Sanskrit word. It is linked together by the letter “s” as according to the grammatical rules in the language of Sanskrit doing do would make the sounds of the letters flow with one another.

Do I have to bow when I say Namaste?

It is a good idea to bow when saying Namaste since it literally means “bowing to you’. Integrating the action of bringing your hands to your heart, followed by a slight bow, validates the meaning of Namaste.

To Namaste or not to Namaste?

When people say Namaste it means to “send out to the universe something good, something that makes sense in that instant, the possibility of a time when all strife, suffering and harm inflicted upon each other and other living things, will simply stop”. (source: Do You Yoga)

A lot of yogis agree that the gesture is the same as expressing gratitude to their yoga teachers and students. However, the word is not a strictly yoga-related term. Namaste isn’t exactly used that way in India according to Deepak Singh. Singh is an Indian-born writer raised to say namaste out of respect and who is quite amused by how people say it nowadays. “It was the equivalent of hello, but with an element of respect. If we didn’t say Namaste, they wouldn’t consider us to be good kids,” Singh relates. In addition, he says it can be relayed to “just about everyone who deserves respect” including elders, neighbors, family and extended family.

How to do it correctly?

Did you know that the hand gesture for Namaste has a specific meaning? It is meant to increase the flow of Divine love and surrendering yourself to the Divine in the heart. To do it, place your hands together in a traditional prayer gesture placing them directly in the centre of your breastbone. The breastbone is considered the heart chakra. Next, close your eyes and bow your head while saying “Namaste”.

Phonetically you say it nun-mUH-st-hey, with the emphasis on the second syllable. 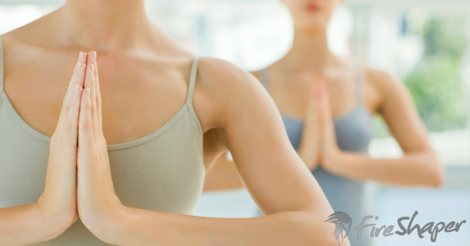